We live in the era of streaming and teleworking, and aware of this in Newskill are working very hard to strengthen its product catalog in order to cover all possible needs of its community. This time the Spanish manufacturer brings us a new model of gaming microphone oriented to streaming, but they also launch a new model of their Kaliope microphone to adapt its aesthetics to all possible tastes of users.

It is not a droid, it’s the new Newskill Agni Professional RGB 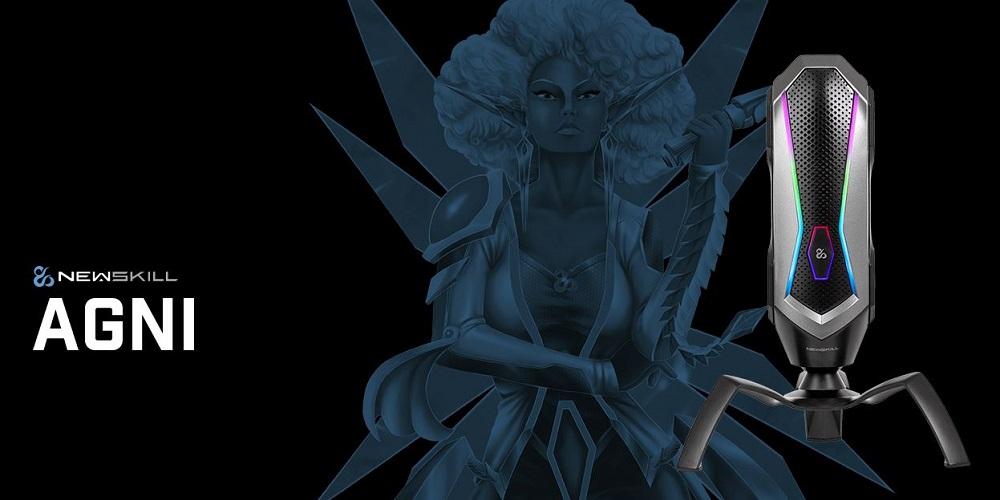 With a more than reasonable resemblance to the droids or bots of science fiction movies, the new model of microphone Newskill Agni Professional RGB is made of reinforced metal to present a robust and durable structure, in addition to a stability that will prevent unwanted sounds are often unwanted in the recordings. Its overall height including the tripod base (or leg form, depending on how you look at it) is 170mm, while its width reaches 58mm to take up a relatively small amount of space on your desk.

Of course, and as the name suggests, it also features RGB lighting to give a touch of color to the streamings, a lighting that is obviously configurable via a button on the body of the device itself that allows you to easily select its seven lighting modes, including of course the ability to turn it off if you prefer an environment without colored lights.

The Agni Professional RGB features a cardioid recording pattern, ideal for streaming because it will only pick up sound coming from the front at an angle of about 45 degrees, thus largely avoiding background noise. It has a sensitivity of 45 dB with a frequency response of 20 Hz to 20 KHz with a sampling rate of 24 bits at 96 KHz and an SNR of 95 dB, ensuring a clear, richly nuanced voice recording and largely avoiding ambient noise despite the fact that it doesn’t have a dedicated noise cancellation system. Of course, it connects to the PC via a USB port.

The new Newskill Agni Professional RGB gaming microphone can already be pre-ordered at the manufacturer’s online store at a price of 59.95 euros, and will soon be available at other distributors of the brand as Amazon or PcComponents.

Newskill Kaliope Ivory, the facelift of the most veteran one.

In addition to the launch of the new microphone to the market, Newskill has decided to make a redesign to the aesthetics of its most veteran microphone, launching the Ivory version of its Kaliope microphone. It has the same features and options as the original microphone that has been on the market for some time, but is now essentially available in white to adapt to the designs and aesthetics of the streaming environments. users who prefer white.

This means that the Kaliope Ivory maintains its cardioid receive pattern with a frequency response of 30 to 18,000 Hz, a sensitivity of -36 dB, an SPL of 120 dB and a sampling rate of 16 bit at 48 KHz. As above, the Kaliope Ivory connects to the PC via a USB connector for full Plug and Play functionality, includes a POP filter and a tripod for tabletop placement, and features configurable RGB lighting.

The Newskill Kaliope Ivory is available for pre-order also in the manufacturer’s online store at a price of 74.95 euros, and will also arrive very soon to other stores like Amazon or PcComponents.

vivo X70 Pro on DxOMark: is Qualcomm or MediaTek better?

IKEA and Asus, accessories and gaming furniture arrive in October