Test of the game NEO : The World Ends With You on PS4 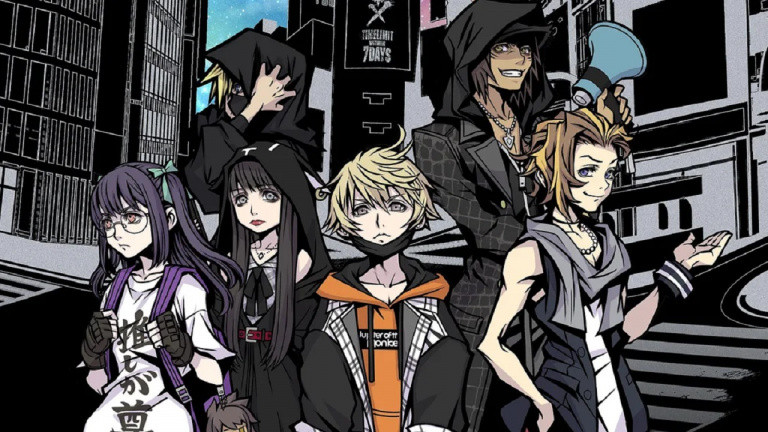 Remember, in 2007, Square Enix published The World Ends With You, an Action-RPG exclusive to the DS developed by the Kingdom Hearts teams. If the license has been discreet since then, it has nevertheless been revived last year thanks to an anime adaptation and the announcement of a new game. Eight months later, this sequel finally arrives and places its action in Shibuya, the trendy district of Tokyo, like its predecessor. But thirteen years later, is the ride still as pleasant?

Before getting to the heart of the matter, a little contextualization. In the middle of the 2000s, when Square Enix was struggling with the structure of the PS3, the Japanese publisher decided to focus on titles for handheld consoles. If its great licenses such as Final Fantasy or Dragon Quest are entitled to their declination on these supports, it is also the occasion for new titles to see the light of day, like The World Ends With You. Released in 2007 on DS and developed by the Kingdom Hearts teams in the graphic style of Tetsuya Nomura, the company’s star character designer, the game had the particularity of setting its action in the heart of Shibuya. 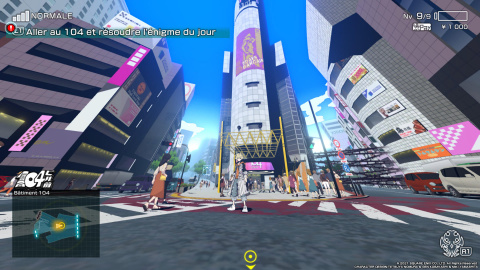 A real city within the city due to its size and importance, it is the fashion and youth district par excellence of Tokyo that a part of the western public could discover thanks to this title. Since then, while TWEWY has been dormant for more than a decade, Shibuya has become an iconic location in many Japanese titles set in a contemporary urban environment. Persona 5 comes to mind, of course, which makes this neighborhood a central element of its aesthetic. Faced with this recent craze around Shibuya, Square Enix then decided to offer a sequel to TWEWY, thirteen years after the release of the original title. 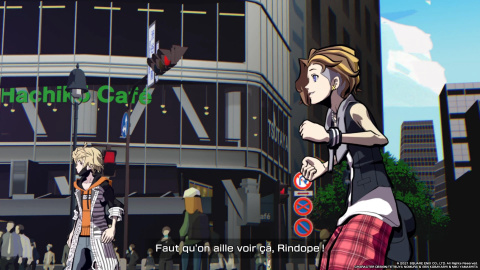 After Neku’s adventures in the original game, this new episode makes us follow Rindo, a teenager who hangs out in the streets of Shibuya with his friend Fret. But while collecting strange badges in the street, our two friends witness a confrontation between humans and strange creatures called Echoes. Although they are still in Shibuya, Rindo and Fret realize that they are no longer in their original dimension and that the people of Shibuya can no longer see them. They are told that they are now participating in the Reaper Game, a kind of survival competition that takes place over a week. During this period, they will have to complete missions against other teams to win prizes. 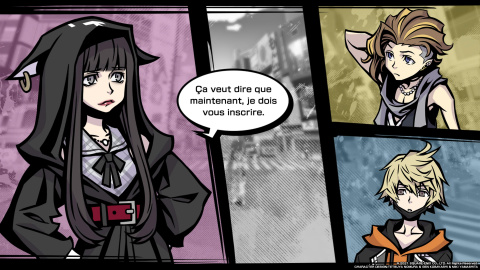 From this rather classic survival game premise, NEO TWEWY manages to offer a scenario rich in twists and turns while remaining more accessible than a Kingdom Hearts scenario. We follow this plot with all the more interest as the cast of characters is very nice, especially the team of heroes who mostly benefit from interesting developments that make them endearing. Unfortunately, it’s more in the direction that the scenario suffers. All of the game’s dialogues take the form of portraits that answer each other in a comic book aesthetic and real-time cinematics are rare. If this allows you to enjoy the illustrations of the art team which reproduces the style of Tetsuya Nomura, after a while, you can feel overwhelmed by tunnels of dialogues which are not always dubbed. 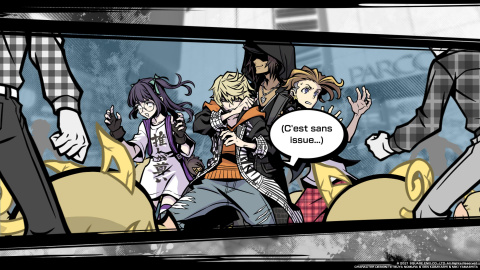 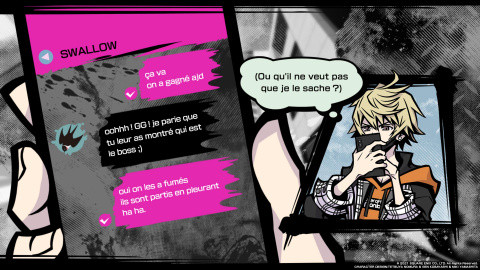 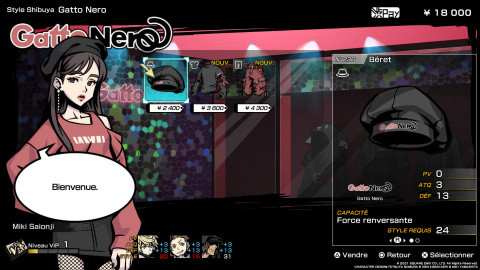 But beyond its story, the great strength of NEO lies mainly in its universe. Since all the action of the title takes place in Shibuya, the city is explored from top to bottom to such an extent that it and its inhabitants sometimes even become key characters in the plot. Despite the urgency of the situation, we still enjoy the pleasures of the neighborhood since the developers have combined elements of everyday life and RPG mechanics. The equipment is replaced by fashionable clothes and the restaurants are used to increase the characteristics of your team. 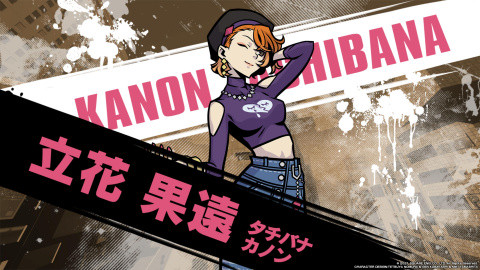 To make sure that Shibuya is the fashionable and youthful district, the characters have been given special care in terms of their clothing, which reflects their character. It all depends on your affinity for Nomura’s style, but all this gives the title an aesthetic that smells of the 2000s, halfway between Jet Set Radio and Kingdom Hearts, despite the presence of modern elements such as smartphones. Moreover, in order to give a good feeling of the youth of the cast, we can underline the care of the French translation which manages to accurately transcribe the current language of young people by using intelligently and sparingly the colloquial register. Thus, all these elements and the careful art direction allow to make feel how Shibuya is the trendy district of Tokyo.

music also plays a central role in the urban and youthful atmosphere of the title. Takeharu Ishimoto, already composer on the first game, offers both new tracks and remixes of old ones. With as much energy as ever, the soundtrack offers a wide variety of genres, at the crossroads between rock, electro, hip-hop and pop. With this variety, the soundtrack is once again reminiscent of Jet Set Radio given the many amazing tracks it contains. Even more than in the atmosphere, the music plays another central role in the title as it occupies an important part of the lexical field of the combat system. 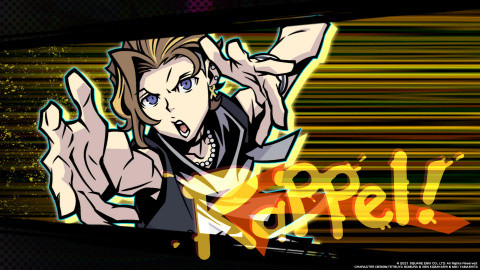 It’s all well and good to

have a neat story and universe, but what do you actually do in NEO? It’s simple: every day, our heroes have to complete a mission before the rival teams in order to get points. Most of the time, the objectives are vague and require you to solve rather simple puzzles. To convince the most recalcitrant NPCs and progress, you can rely on the extrasensory abilities of your team members: recall a memory to someone, engrave an idea in his head, face his inner demons or go back in time… All means are good to get out of a bad situation. Unfortunately, as the adventure progresses, you quickly realize that you often do the same thing and that the daily missions are not all that inspired. Sometimes, some of them are just tunnels of fights without much thought. 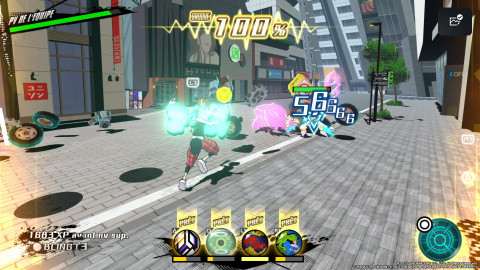 Because yes, Action-RPG obliges, the fights are the heart of the game. During these battles, we fight Echoes with the help of badges that give our characters powers. Moreover, the game offers a wide variety of abilities: hand-to-hand attack, ranged, bombs, healing, ray, black hole, charged shot… In concrete terms, with the controller in hand, each button corresponds to a character and therefore to a badge that is discharged with each use.

goal of the fights is then to vary the assaults between the different members of your team and to hit the enemies in rhythm to make the Groove gauge go up to 100% and to trigger powerful attacks. 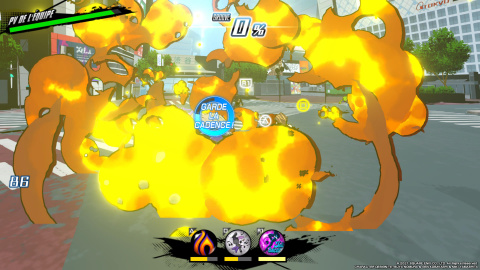 You will have understood, the fighting gameplay is thus rather simple. At first glance, the confrontations are exhilarating thanks to the deluge of effects on the screen and the feeling of power that you get from easily eliminating enemies at full speed. Unfortunately, if the latter become a little more complex over time thanks to a few subtleties, we must admit that we are still content to hammer the buttons of the controller at the end of the game.

It’s been a while. Because of this simplicity, the boss battles are not very interesting and do not rely on the nice Groove mechanic mentioned above. The problem is also with the readability of the action. Regularly, it is difficult to understand what is happening on screen because of the many effects and the camera that has trouble following. Yet on the PS4 version we played on PS5, the title manages to deliver 60fps consistently.

With its neat artistic direction and its charming urban universe, NEO The World Ends With You manages to offer a pleasant adventure that will delight fans of Japanese culture. We enjoy discovering the Shibuya district in its every corner and taking advantage of the many shops it includes. The stroll is all the more enjoyable as it offers a story full of twists and turns and endearing characters. Finally, it is rather in the combat system that the limits are felt. If the latter is rather pleasant and nervous at first, the lack of depth ends up making the confrontations really repetitive in the long run. Nevertheless, it’s not enough to spoil this twenty-hour straight tour of Shibuya, which will delight those who appreciate Nomura’s style and Action-RPGs.

Give your opinion on the game!

This page contains affiliate links to some products that JV has selected for you. Each purchase you make by clicking on one of these links will not cost you more, but the e-tailer will pay us a commission. Read more about this.