In a presentation, Intel has revealed its roadmap of processors and manufacturing nodes with important news regarding the future of the company currently led by Pat Gelsinger. The new information Intel has provided gives us a much clearer roadmap regarding its plans to compete against AMD in the CPU market and against TSMC as far as third-party manufacturing is concerned. 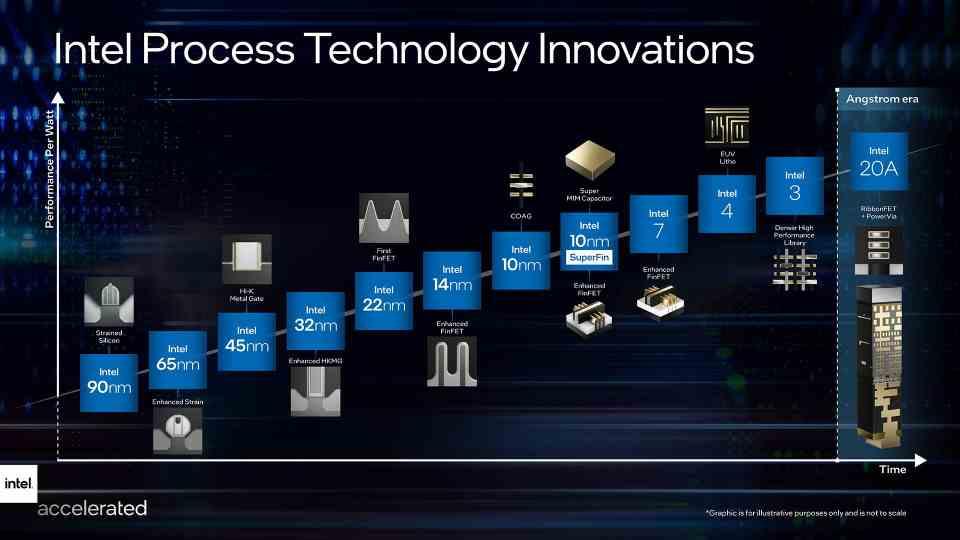 In a marketing ploy, but one that makes perfect sense. Intel has renamed its manufacturing nodes, as so far the fact that its 10nm node though was equivalent to TSMC’s 7nm node and even better than its biggest rival in semiconductor manufacturing.

Telling the general public that a 10nm node is equivalent to a 7nm node was confusing to say the least, so Intel has decided to rename its 10nm node, whose next version was until now called 10nm enhanced SuperFin with the simple name of Intel 7, which is already in production in large volumes as it is the node that will be used by Alder Lake and Sapphire Rapids. The advantages over the 10nm SuperFin node used in Tiger Lake-H? Between 10% and 15% yield. 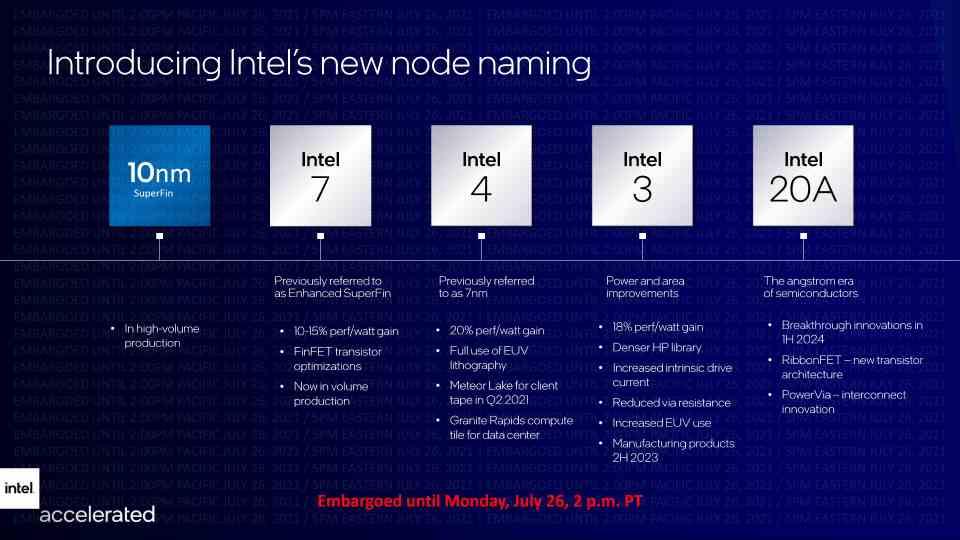 As for the future of the node formerly known as Intel’s 7 nm node, equivalent to the 5 nm node in terms of specifications and density, this has been renamed to Intel 4. The improvements over Intel 7? Well, they’ve promised an additional 20% in terms of performance per watt. The Intel 4 fabrication node will be used in Meteor Lake and Granite Rapids, being the first Intel to make use of EUV lithography. Its release date? Intel already completed the end of the design process of the Compute Tile what form of these processors in the second quarter of 2021, so it is expected to start manufacturing chips in 2022.

The third node is dated for 2023, it is Intel 3 and promises another 20% increase in performance over consumption compared to its predecessor. With all this, we can deduce that Intel intends to introduce a new manufacturing node every year, a difficult feat to say the least.

After the nanometers come the Armstrongs 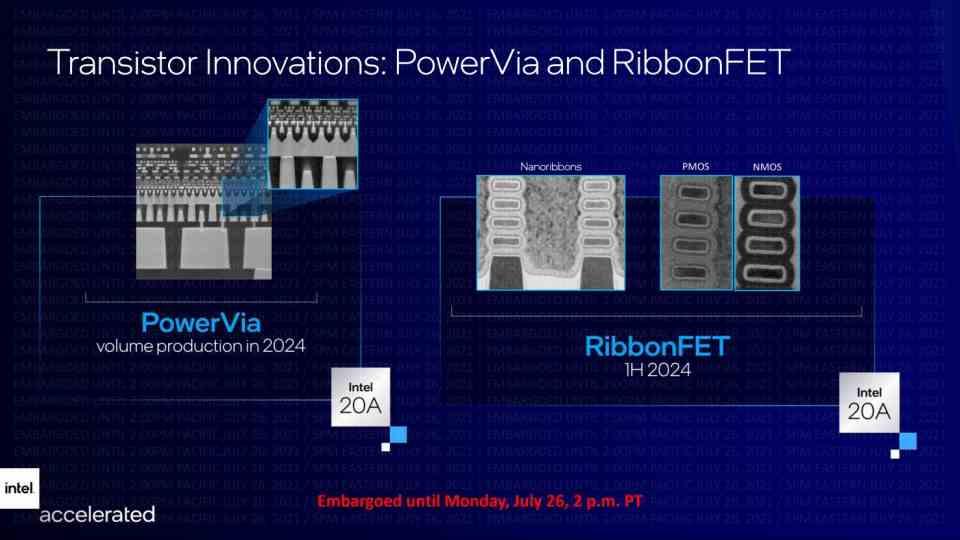 For 2024 Intel has a new manufacturing node planned, which they have dubbed Intel 20A, where the A stands for Amstrong, which is a measurement where an Amstrong has the size of 0.1 nm. So we can deduce that it could have been called Intel 2. The differences with other nodes? Intel will introduce a new type of transistor called RibbonFET, which are Intel’s implementation of the Gate-All-Around Field-Effect Transistor or better known as GAAFET.

The second novelty is called PowerVia, a name that refers to the new PDN that Intel will introduce in node 20A, and therefore a new way of supplying energy. The novelty is that all interconnects for the PDN at the top of the chip will be moved to the bottom of the chip, from where they are connected to the chip directly without going through the interconnect interface. Which would have to go through the PDN if it were on top of the chip. All this could mean that the Power Delivery Network of the processors under the Intel 20A node would be on a separate chip in a 3DIC configuration.

But it doesn’t end there, and although Intel hasn’t included it in the roadmap, they’ve talked about another manufacturing node, called Intel 18A, which would be planned for early 2025 making improved RibbonFET transistors. The peculiarity of this manufacturing node? It requires a new type of machinery for lithography by making use of High NA EUV, a type of high-precision EUV machinery from ASML that is necessary for such a small fabrication node. Intel will be the first foundry in the world to receive this type of machinery. 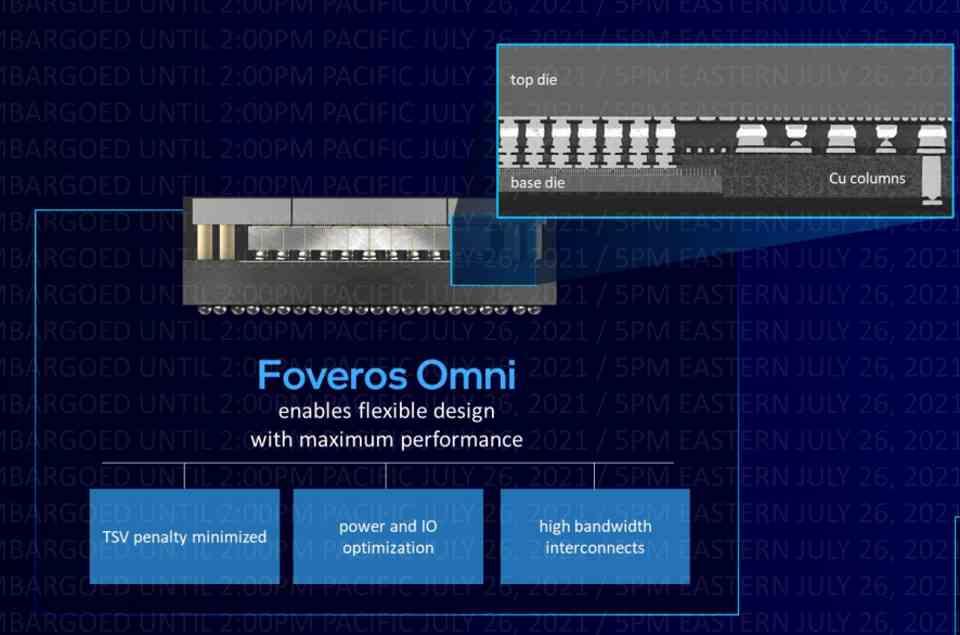 Being the first of which Intel has presented Foveros Omni, which is an evolution of Intel Foveros technology used in Lakefield processors. It is a 3DIC packaging system that allows direct interconnection between the two chips. Foveros Omni allows a single processor to be broken down into several different chips with different manufacturing nodes each. Intel expects Foveros Omni to be ready for mass production by 2023.

Foveros Direct on the other hand is another flavor of Foveros, but one that is intended for direct copper-to-copper connection. One of the reasons for the vertical interconnect between chips or 3DIC, is to increase the number of interconnects, which allows to increase the bandwidth without having to shoot the clock rate north causing high consumption. This is achieved by using matrix interconnects instead of serial, so the size of these interconnects is important.

Evolutionary Foveros in its first generation for Lakefield uses 55 micrometer interconnects, but the second generation of Foveros that we will see in the Ponte Vecchio HPC GPU drops the size to 36 micrometers. The size of Foveros Omni and Foveros Direct? 25 micrometers and less than 10 micrometers respectively. They also revealed that both Foveros Omni and Foveros Direct are not only combinable with each other, but also with Intel EMIB to create complex heterogeneous systems.

See also  An AMD Ryzen CPU for 8 euros? This is how you can get them in Japan

Intel has not only talked about its new packaging and new manufacturing nodes, but also about the processors we are going to see at least in the next three years, both at the PC and server level. The first ones being the ones that are going to use the Intel 7 node and therefore Alder Lake and Sapphire Rapids. Of which we already know quite a few details and whose design, at least in the case of Alder Lake is completely finished.

But where Intel has shown more news is with Meteor Lake, which is a chiplet-based design where the intercommunication is done using several interconnected tiles using second-generation Foveros. Meteor Lake will make use of three different tiles, the first one is the Compute Tile, the second one is in charge of the processor I/O and the third one is an Intel Xe GPU that goes from 96 EU to 192 EUs.

All the tiles in both Meteor Lake and Granite Rapids are connected to what Intel calls the Base Die at the bottom. This will take care of the different intercommunication between the cores using the second generation Foveros interconnect. This is the same intercommunication technique that Intel uses in its Intel Xe-HPC or Ponte Vecchio GPU.

Nintendo Switch Pro may not happen