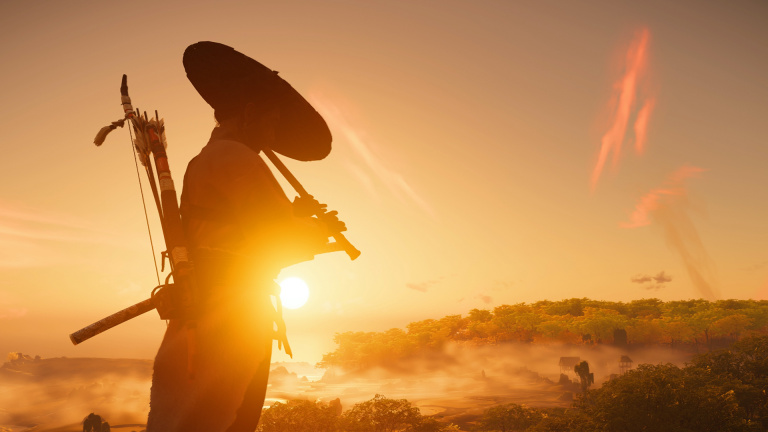 The adventures of Jin Sakai continue in 2021 on PlayStation 5. New island, new scenario, Japanese lip sync, dynamic 4K at 60i/s… the JV editorial staff spoke for 20 minutes with Jason Connell and Patrick Down, respectively Creative and Art Director and Senior Staff Writer for Sucker Punch studios, to bring some details about Ghost of Tsushima Director’s Cut

The new area of this Director’s Cut, Iki Island, will be accessible after the end of Act 1. How did you proceed to make this new part of the game fit naturally with the original game?

This is what we did after we finished and released Ghost of Tsushima. We had a chance to step back and think about other scenarios that really excited us, motivated us, and one in particular clearly stood out as our first choice. And that’s the one that we decided to sort of expand on with the Iki Island scenario. During that process, of course, we made sure that this story was going to be meaningful and exciting for players, whether they were coming to Tsushima for the first time or whether they had already completed the campaign several times, maybe even in New Game Plus. So we designed the story very carefully, so that it would fit perfectly between the end of Act 1 and the beginning of Act 2. That was part of our approach from a storytelling perspective. The idea was to create a story that made sense for Jin Sakai’s character, and that also fit with the main story of Tsushima. That’s what we’ve been doing since the project was approved (the Director’s Cut)… making sure that it all works. – Patrick Downs (Senior Staff Writer – Sucker Punch)

Why did you choose a new area accessible in the first third of the adventure rather than an epilogue to Jin Sakai’s story, accessible at the end?

It was a real challenge for us because we wanted to create a new story, not just a sequel to the adventure, a sequel that tells what happens after the end. We wanted to respect the main story with Jin (Sakai), Lord Shimura and Khotun Khan. We thought the ending speaks for itself. So we wanted something that was deeply rooted in our understanding of that story, but we gave the players the ability to choose when they wanted to embark on this new adventure. That’s another thing that’s really important to us. It’s really important in an open world story to keep in mind that this story is not just our story. It’s also the player’s story, and we wanted to give them that power. It was the right thing to do. – Patrick Downs (Senior Staff Writer – Sucker Punch)

<p>The original title already included many flashbacks to Jin Sakai. Can you tell us what elements of the character will be explored in this Director’s Cut?

Here is our approach and some information about the beginning of the story. Jin (Sakai) discovers a new and mysterious Mongolian threat, and learns that it comes from the island of Iki. There are two main factors with Iki (the island) and Jin (Sakai). The first factor is the fictional island of Iki that we have imagined. It was a haven in the 13th century for pirates and smugglers who operated somewhat outside the control of the samurai. Jin (Sakai) is going to have to go there, and deal with that in addition to this new and strange Mongolian threat. The other element is the dark history that links the Sakai clan and the island of Iki. So we’ll slowly learn more about this as we explore the island, confront the Mongols, and work with the natives. It mostly revolves around the Sakai clan, but Jin also has a personal connection to this place. – Patrick Downs (Senior Staff Writer – Sucker Punch)

The game could seem a bit repetitive, especially if you were attacking the camps one after the other. How did you approach the design of Iki Island? Will it be more varied and vertical than Tsushima?

Yes. With the opportunity to tell the story of Iki (the island) and contribute to this Director’s Cut, we also have the opportunity to fill a new island with all the great things you enjoyed about Tsushima Island, but in a different way. There will obviously be new biomes, new types of animals, but also some of the PS5 features so that players will find a familiar gameplay made of what they loved in Ghost of Tsushima, but also different. It’s exciting to throw players in, and I think they’re really going to enjoy it. – Jason Connell (Creative and Art Director – Sucker Punch)

Can you tell us more about the new enemies on Iki Island? Will they have different behaviors, weapons or techniques than Tsushima Island?

I can certainly talk about it from a narrative point of view, especially about the new enemies. We’re obviously going to face a new Mongolian threat. They are very different from the Mongols of Khotan Khan. This is a group of Mongols led by a character called Ankhsar Khatun who is known to everyone as The Eagle. They’re obviously going to have new skills and bring new challenges to the players simply because they have a different history and background, and a way of looking at the world that’s all their own. That’s the main threat there. The island is also populated by pirates and smugglers who will harass Jin for money. He can work with them or not. Generally speaking, there are some serioushreats to consider on Iki (island). – Patrick Downs (Senior Staff Writer – Sucker Punch)

Alongside the release of the Director’s Cut, you will be rolling out several updates to the original title. We will now be able to lock on to a target. Is this some sort of backpedal on your creative vision?

As a team, we like to prioritize two things. We like to have a core creative vision and be excited about what we’re creating, but we also like to listen to feedback from our fans. When the game came out, we were very proud of our accomplishment, we’re incredibly proud. We created it to be the way it is, and we were very proud of the way it came out, but there was some feedback, notes from the community, simple things like “I’d like to be able to hide the quiver that’s on my back” because they just like to look a certain way or “I’d like to have the ability to lock on to a target”, which is a common option on these types of games and something that some players have requested. At the end of the day, we really want people to play our game, and enjoy it in the way that’s best for them. That’s really important to us. It was both about making compromises, and keeping a vision. Creating something, and sending it out to a fan base, for them to respond to and enjoy. And so we responded to that and implemented some of those features in the Director’s Cut. – Jason Connell (Creative and Art Director – Sucker Punch)

What other new features can you expect?

We have a variety of new features. Our goal is to bring people into Iki by giving them a whole new environment and new ways to interact with it. You’re going to see some new experiences, animals for example. You’re going to see some gameplay elements around that. We’re going to show them briefly in our trailer. We’ve also invested in some of the cool features (of the PS5) like adaptive triggers and haptic feedback to make the game feel better. – Jason Connell (Creative and Art Director – Sucker Punch)

Japanese lip sync will only be available on PS5. On the PlayStation Blog, you explain this because of the power of the console. Even so, why not bring this feature to the PlayStation 4?

I think our process was this. We really looked at bringing Japanese lip sync to the PS4 when we made the original game. It was obviously something we were very interested in. We abandoned the idea because of technical and logistical limitations. It was going to be prohibitively expensive, and we wanted to be able to do it. That being said. Obviously, when we came back, the PS5 was there. The SSD is so fast on the PS5 and combined With our improved cinematics pipeline, we’ve now been able to render cutscenes and cinematics in real time. Even when you’re in a cinematic and the locations are changing very quickly, we’re now able to render all of that in real time, making Japanese lip sync possible. We’re excited to be doing this on the PS5, and on a personal level, this is how I play the game. I’m going in Kurosawa mode on the Director’s Cut with full Japanese lip sync. – Patrick Downs (Senior Staff Writer – Sucker Punch)

See also  Philips Kitchen Robot: Which is the best in 2021?

Did you encounter any difficulties regarding the porting of the game from the PS4 to the PS5? Can you tell us how the process is going?

Neither of us are technical wizards or programmers or anything like that, but we’re a team full of incredible engineers who blow our minds on a daily basis. I think we have nothing but admiration and respect for that team. We look at the PS5 version more as an opportunity. It’s an opportunity that comes with new features that we didn’t have, whether it’s Japanese lip sync or 3D headset integration. It’s pretty amazing. Or the features that we talked about like adaptive triggers and haptic feedback as well. I think we see it more as an opportunity, not necessarily something that’s hard to do. – Jason Connell (Creative and Art Director – Sucker Punch)

I think one of the most exciting things about the PS5 is having the ability to render the game seamlessly in dynamic 4K and have a higher frame rate. I find the game to be exceptionally beautiful. I really enjoy roaming this world, and suddenly when I put it on a PS5, I have a smooth, higher resolution. It’s exciting. It’s like looking at the world in a totally different way and experiencing the islands in a smoother, more beautiful way. It’s pretty exciting for us. – Jason Connell (Creative and Art Director – Sucker Punch)

Do you have a message for our readers?

We thank our fans. If you’re a fan of our game, I hope you enjoy the new content that we’re offering, and that you get a chance to check out the new island, all the beautiful biomes, explore some of the photo mode enhancements, and enjoy the deeper story of Jin (Sakai) that Patrick (Downs) and his team have put together for us. – Jason Connell (Creative and Art Director – Sucker Punch)

Gameplay Boyfriend Dungeon : We go on a few dates